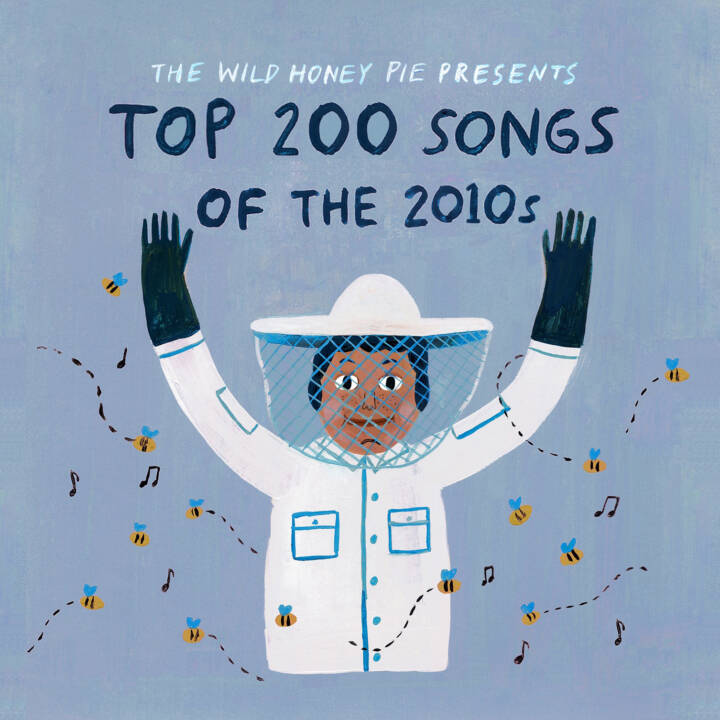 The 2010s has been a decade of extraordinary growth for music, The Wild Honey Pie, and the world at large. As the business and culture of music experienced unprecedented changes like the birth of music streaming in the US, so did we as a company along with the artists that have been there with us since the start. During this decade we have seen the best and the most trying of times, and through it all we have evolved into the ever-expanding music and food collective we are today. Compiling a list of our top 200 songs and 50 albums of the decade was by no means an easy feat. Suffice it to say that each and every song, album, and artist on this list carries a significant weight and meaning to The Wild Honey Pie and every member, past and present, on our team. Odds are, if you are reading this, you too will feel the importance of these songs and records whether you’re experiencing them for the first, fifth, or fiftieth time.

2010 marked the second year of The Wild Honey Pie as well as the beginning of so many transformations and significant turning points in the careers of some of the most legendary artists of our time. In 2010, Swedish pop star Robyn released her iconic fifth studio album, Body Talk, which includes the second track on our list and her most influential song to date, “Dancing On My Own.” Written by Robyn and her producer, Patrik Berger, the track tells a classic story of heartache turned into a queer, disco anthem. Despite its older influences and focus on millennial club culture, the song maintains a timelessness which is largely due to its inherent emotional-yet-carefree spirit. Since its initial release, “Dancing On My Own” has soundtracked countless television shows including Gossip Girl and Girls—and has been described as “perfect” by Lorde, fellow queen of the 2010s.

During that same year, we were blessed with multi-instrumentalist, Joanna Newsom’s incredibly impressive triple LP, Have One on Me. The harpist with a distinctive, Joni Mitchell-esque vocal tone has an eerie capacity to make a ten-minute song feel light, enthralling, and unburdensome. The clarity and depth of her voice make you hang on to every word, even after two hours of listening. Have One on Me is The Wild Honey Pie’s top album of the decade; the degree to which this record has been there for us throughout the past ten years is incomparable. Each song on the album feels like a conversation: intimate and honest. Newsom truly gets at the core of the human experience and that’s really what it’s all about for us at The Wild Honey Pie.

Another crucial record of 2010 was High Violet from The National. The band’s dark, sad, and ornate sound is so close to our identity as a collective. The Wild Honey Pie was started in part to shine a light on the music that rips us down and makes us feel; The National has and always will be one of those bands. “Sorrow,” the second track off the album, fully captures the kind of self-destructive, sad dude melodrama that’s ultimately reassuring—making us all feel a little less alone in this big, crazy world.

The next couple of years saw the birth of even more defining records by artists that all hold a permanent place in our hearts—one of those being Bon Iver aka Justin Vernon, who released his sophomore, self-titled album in 2011. Vernon’s debut For Emma Forever Ago, which turned him into an indie-folk household name, is hard to surpass. That being said, his second album succeeds in other ways. For starters, it proved that Vernon’s abilities expand well beyond acoustic folk music. It also included our top song of the decade, “Holocene,” a track that truly set the pace for what we would cover and gravitate towards for years to come. “Holocene” is a steady reminder that the universe doesn’t belong to us, we belong to it, reminding us to cherish that fact and to see the beauty in it. The song sparked something in us that we didn’t even know was there; we saw this come to life for the first time when Bon Iver played the Prospect Park Bandshell. The experience is one we will always remember, and it was just one of the many performances that made us fall in love with one of our favorite musicians.

2011 was also the year we fell in love with St. Vincent aka Annie Clark. Even though Clark had been releasing music as St. Vincent since 2007, it wasn’t until the release of her third album Strange Mercy that we genuinely became super fans. “Cruel,” our favorite track off the record and our 10th song of the decade is intricate and buoyant—moving from layered, synth hooks to complex counter-melodies that slightly shift the focus away from Clark’s signature guitar work without sacrificing her fearlessly unique artistic vision. Her crazy, keen guitar skills are still the centerpiece of the album; her ability to manipulate and shape-shift her instrument really shines through. With each subsequent project, Clark has proved her ongoing growth as a musician, songwriter, and performer. We’re thrilled to hear what she will produce in the next decade.

In 2012, we discovered one of our other long-time favorites, Kishi Bashi. One day an ordinary pitch email from a publicist turned into the beginning of a lasting fandom. Seeing Kishi Bashi record live for the first time in 2012 for one of our Buzzsessions and later on that same year at The Beehive at SXSW were both moments that helped shed a light on why we do what we do every day: for the music and artists that drive it all. The first time we heard his song “Manchester” was an epiphany, we knew we had to do everything we could to elevate him and make sure everyone who follows us was exposed to what we know is so special about him. The feeling of instantly recognizing that what an artist is doing is exceptional and unique happened again that year with Frank Ocean, who would soon become one of the most influential artists of the decade and today. Even though we were barely the first to jump on the Frank boat, the birth of channel: Orange reminded us of the power of storytelling and vulnerability. Even 10 years later, no contemporary R&B record has managed to sound evenly closely akin to Ocean’s stunning, unparalleled debut. Simply put, channel:Orange is inimitable. “Thinkin Bout You,” our favorite track off the album and our 7th song of the decade, demonstrates Ocean’s breadth as an artist as well as his ability to effortlessly leap from genre to genre and still sound like himself. Ocean’s prodigious skill and ambition are only doubled by his scarcity in terms of releasing projects—we must cherish every bit of Ocean we’ve been given. For this reason, channel:Orange is permanently towards the top of our list.

Moving forward to the year 2015, which brought the release of Sufjan Stevens’ Carrie & Lowell, one of the most meaningful albums to The Wild Honey Pie as a company and to our founder, Eric Weiner. The record was released around the same time Eric was going through an increasingly trying time in regard to his mental health. It was in 2015 that his issues could be ignored no further, as he outlined in his Mind Control playlist. After many months of battling with little to no progress, Eric found Gould Farm, a therapeutic community in Massachusetts that promotes recovery for people with mental health and related challenges. Going to this rehab facility truly changed his life and set him on the road to recovery. It was around this period that Stevens’ Carrie & Lowell came out and really left a mark on Eric’s life. The track, “Should Have Known Better,” our 6th song of the decade, captures the intimacy, sincerity, and compassion of Stevens work. The song is like a breath of fresh air after having been trapped in a smoke-filled room. It gets right at the core of what can make the human experience so painful and heartbreaking, tackling subjects like mental illness, loss, drug addiction, substance abuse, and loneliness. Carrie & Lowell is an open invitation to Stevens’ heart-wrenching life story, one that is gently colorful and tremendously pleasing to the ear despite its tragic story lines.

It’s rare to come across an artist as intensely personal and deeply poetic as Stevens multiple times in a decade, but I guess we were fortunate enough this decade. Just a year after Carrie & Lowell came out we were introduced to one of the most cherished indie bands to-date, Big Thief. The four-piece band is wildly incomparable and almost mythical, much like the serendipitous way they all managed to meet in Brooklyn and record their first album together shortly after in 2016. Most of the songs off of their debut, Masterpiece wonderfully showcase their humble beginnings and comfortably warm, familiar sound. The vocal melodies and intertwining guitar lines feel like eating a refreshing, bright-colored popsicle in mid-July: so thoroughly enjoyable you wish it would never end. All to say, by the first record we were already hooked (like most indie music folks), but it was their second album, Capacity that truly solidified our undying love for the band. Capacity came out in 2017, and we were lucky enough to receive the album months before its release after having emailed their manager to let them know how much we adored the band’s debut record. The first time we listened to “Mary” in our Greenpoint office was one of those earth shattering moments in which we realized Big Thief's undeniable, intensely powerful ability to make you feel sad and happy at the same time, in equal measure. The song was on repeat in our office for months after that initial listen and we were forever changed.

That very same year, we had a similar experience when we heard Phoebe Bridgers. The LA-born indie rocker blew us all away with her stunning, incredibly timeless debut Stranger In The Alps. Like most of the artists on our list, Bridgers is an exceptional storyteller whose narrative skill is well beyond her years. Her knack for piecing together nostalgic elements to create something exquisitely human and vulnerable is especially apparent in the track, “Motion Sickness,” number three on our list. This gorgeous, anthemic song hits in all the right places and never gets old. Like Bridgers, it’s both cool and warm, quiet and loud, distant and approachable. “Motion Sickness” is a testament to Bridgers’ exceptional grasp on language and its relationship to song. When we looked back on this decade, we realized that what mattered most in the end was human connection. For us at The Wild Honey Pie, the surest way to consistently receive that sense of closeness is through music. We hope that the songs in this list inspire a sense of togetherness, bringing you closer to yourself, to one another, and to the world around you.

Stream the list directly on Spotify or Apple Music. Extended thanks to Eric Weiner and all of our writers for contributing to the creation of this list, it wouldn't have been possible without each and every one of you. Massive thanks to Zet Gold for the stunning playlist cover. 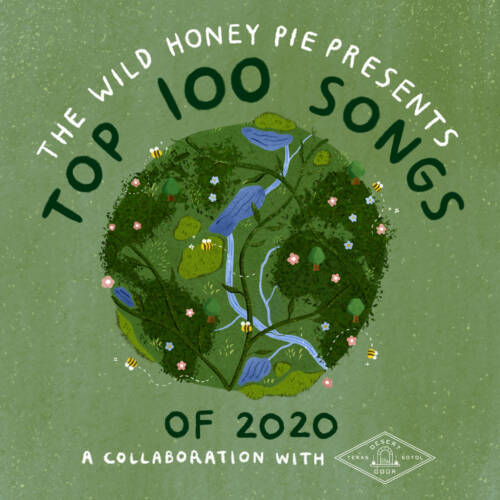 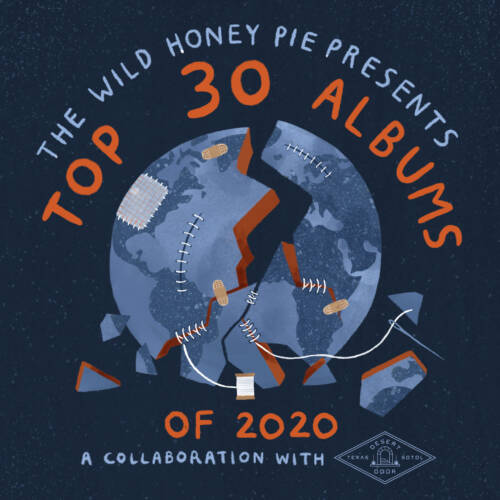