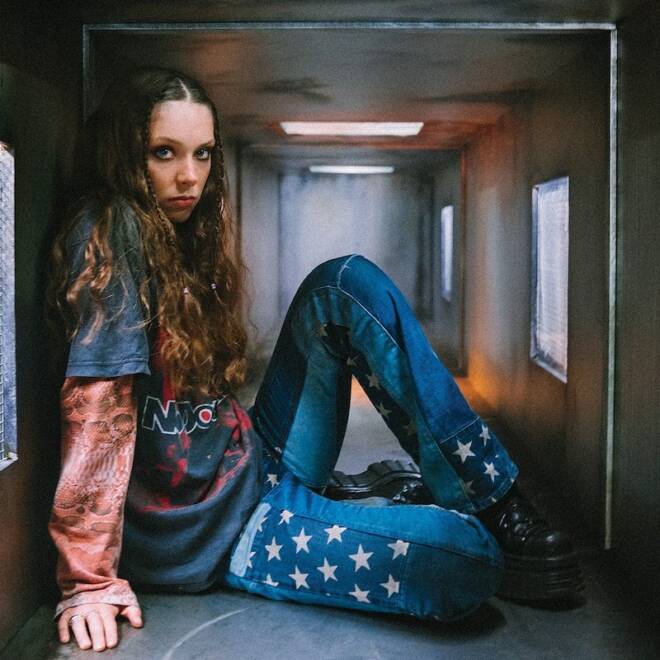 British indie rock newcomer Holly Humberstone's newest single "Please Don't Leave Just Yet" is as emotionally direct as its title entails. A bare-bones breakup song, the track finds Humberstone wrestling down her own desperation as she pleads to not be left alone. It's a glowing, moody pop song that you'll want to hear over and over (even if it makes you a little emo). It's got that gorgeous, lagging, night drive quality prevalent in so much of Humberstone's music. The urgency of her language couples perfectly with Matty Healy's arrangements. Sweeping, vulnerable and frail, the lyricism is bolstered by Healy's surprising and nuanced pop production. It's quintessentially The 1975-esque pop, with layered, interesting vocal effects and punchy saxophone parts that you'd never envision for an emotionally charged pop hit, and yet it somehow fits. That's the mastery of these two British indie pop voices: they revel in the unexpected. The 1975's most recent album, Notes on a Conditional Form, was their most experimental album yet, genre-jumping from electronic to country. Humberstone is an anomaly herself, having garnered critical success following her first EP release (Falling Asleep At The Wheel) at the age of 21. Healy's established himself as a household name in the modern Britpop scene, working with everyone from beabadoobee to FKA Twigs, and Humberstone is quickly emerging as a titan in her own right. I'm looking forward to hearing more from these two in the weeks to come, with Humberstone's sophomore EP arriving on November 5. 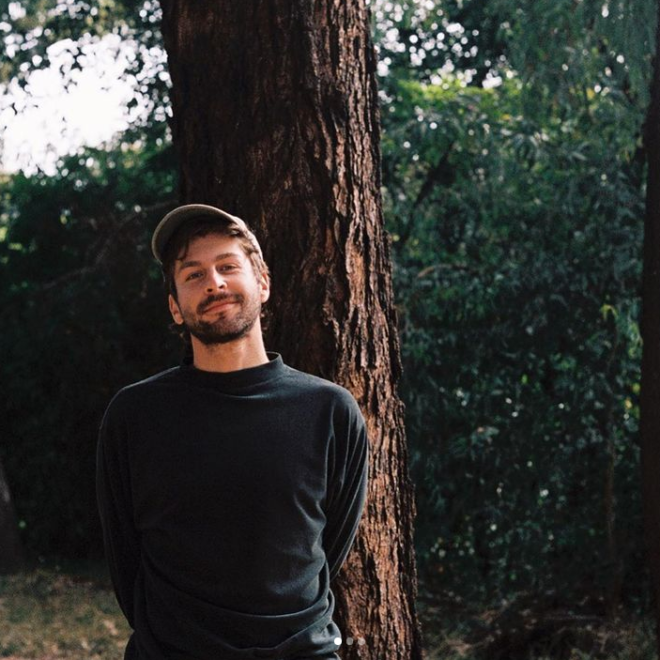 The project of LA-based multi-instrumentalist and singer/songwriter Noah Weinman, Runnner has been steadily growing a fanbase since the release of their first single in 2019. Now, two years and a global pandemic later, they are releasing their anticipated debut album Always Repeating with Run for Cover Records. The opening track “Monochrome” has all the hallmarks of the magical sound of Runnner: raw and clever songwriting, heart-tightening vocals and dynamic acoustic instrumentation. The soft picked banjo and acoustic guitar create a perfect synthesis for Weinman’s emotive vocals and lyrics to flow through, while the tight drums accentuate the changing movements of the song. A meditation on a past relationship, the lyrics follow through a tapestry of memories, in black and white like an old film. As Weinman reaches the end of his memories, he reminds us that they are often warped by our emotions and nostalgia as he sings, “I’ve been trying to draw you with my eyes closed, you’re not gonna like how it turned out.” Photo by Silken Weinberg. 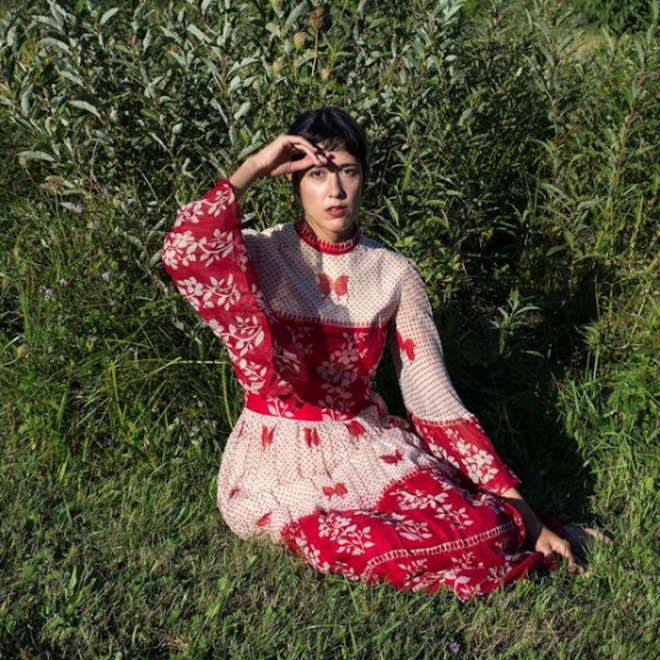 Singer and producer Nandi Rose has been releasing music under Half Waif since 2014. Her latest album Mythopoetics takes a mythological view of events from her life and her family, like a potpourri of stories passed down through generations. The fourth track “Fortress” centers around the anxiety of a loved one leaving, however inevitable it may seem. Produced alongside Zubin Hensler, the song is a luxuriantly layered gem of synth-pop. Rose’s siren-like vocals sit atop the garden oasis of synthesizers, ethereal and honeyed. The song’s bridge is a grand explosion, like fireworks of sound as the chorus repeats like a plea for life. As the last flare of the instrumental fades out, Rose’s vocals are left with the sound of an acoustic piano and swelling pads as she sings two simple phrases that manage to evoke so much: “I guess this is all for you / My bet is, it's all for you.” Photo by Ali Kate Cherkis. 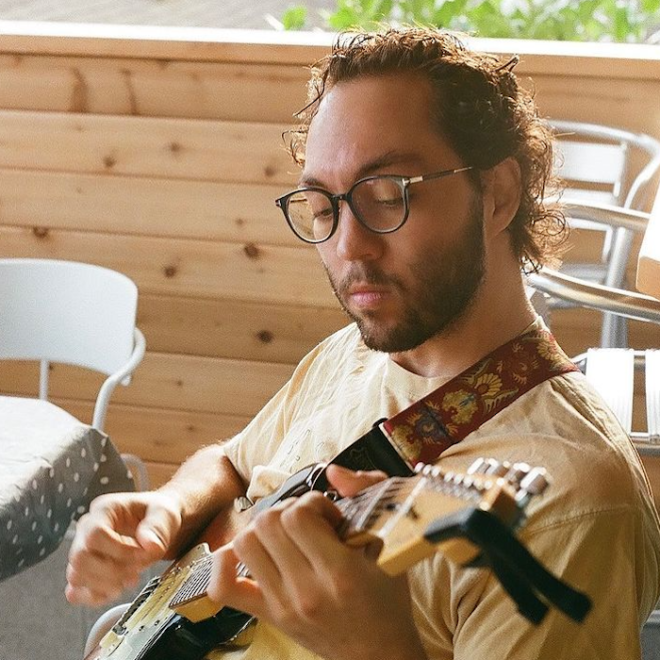 Hailing from Toronto, Canada, Frank Mighty’s Hotline makes neo-psychedelic earworms. With a choppy lo-fi piano intro making way to a 2-beat pattern grove and falsetto vocals, “Rakefire” is quick to grab your attention. An Old English insult, a rakefire is defined as a person who overstays their welcome, something this song will never do. Frank Mighty’s Hotline’s soulful voice pairs beautifully with the verse’s minimal melancholic instrumentation, while acoustic instruments usher in the song’s triumphant chorus. The song’s lyrics deal with the fear of not wanting to become a rakefire, like the people you’ve distanced yourself from. “I like the stuff you do just to stay relevant” sums up the song’s look at those who are unable to let go of the spotlight in today’s media and popular culture landscape. While the chorus, “I don’t want another rakefire in the house that I built with my own two hands,” is a self-reflective look at the rakefire in ourselves. Photo by Jenn Stevens. 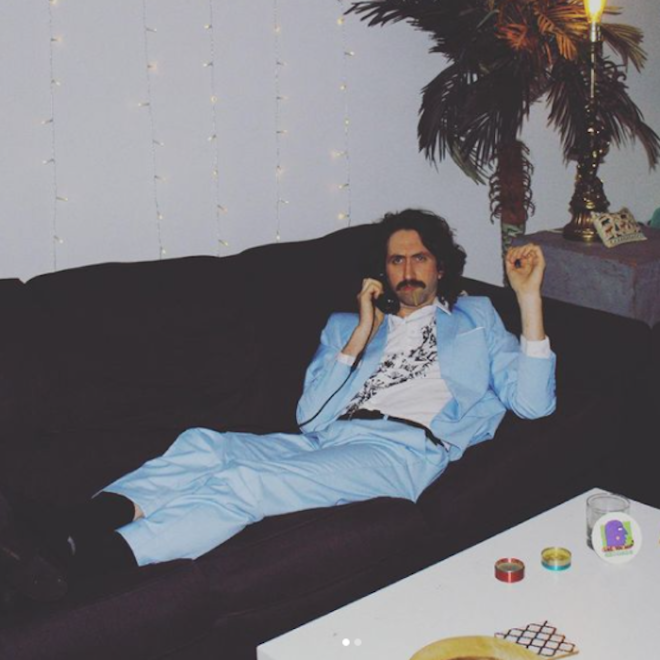 From the Knoxville, Tennessee quartet Crumbsnatchers, “One Call” is a sun-drenched, high-energy rock tune, infused with some modern psychedelic influences. The group’s name comes from frontman Sam “Guetts” Guetterman’s experience at a faith-based juvenile detention camp when he was 16 years old. The group’s sound is as unique as its name, shaped by a wide array of artists and genres. With its bouncing bass line, tight drums and catchy melody, the song is the epitome of a head-bopping summer track. The melody and harmonies are reminiscent of early surf-rock, making their way down the scale. Despite its catchy upbeat instrumentation, the song’s lyrics lament on a love lost: “I only wanted to make one call / Nothing I could ever say could ever bring my baby back home.” The juxtaposition of the lively instrumentals and the contemplative lyrics makes the song the perfect candidate for crying while on your drive to the beach. Photo by homermixesmusic. 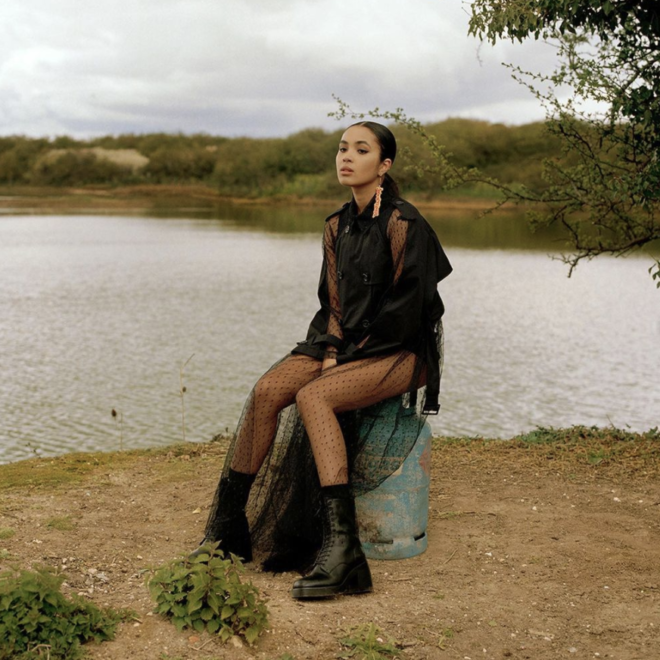 As any relationship begins to fade, there comes an impending shift from thinking you might need to leave to actually going through with it. “Marathon,” off of London-based producer and songwriter Aziya’s newest record We Speak of Tides, manages to embody the intensity of that decision and the electrifying energy that pours out of it. In the beginning, an echoing guitar backs Aziya’s soulful vocals before the drums come crashing on in, placing emphasis on her passionate and self-assured lyrics. By the second verse, she's created a cinematic soundscape, and whether that's an angsty-teen-rebellion breakup scene or the climax of an action movie, I can’t bring myself to care—Aziya’s bellowing call of empowerment has me drawn in. “Marathon” is the kind of song that is best appreciated through noting its details: the chamber harmonies sprinkled throughout, the sonically dramatic halts and crashes, and Aziya’s dominating vocal delivery blend eloquently together to create a track that is as earnest as it is kickass. Whether it's “Marathon” or any of the other emotionally abundant tracks on We Speak of Tides, Aziya’s dynamism and charm offer something that everyone can latch onto. Photo by Zachary Chick. 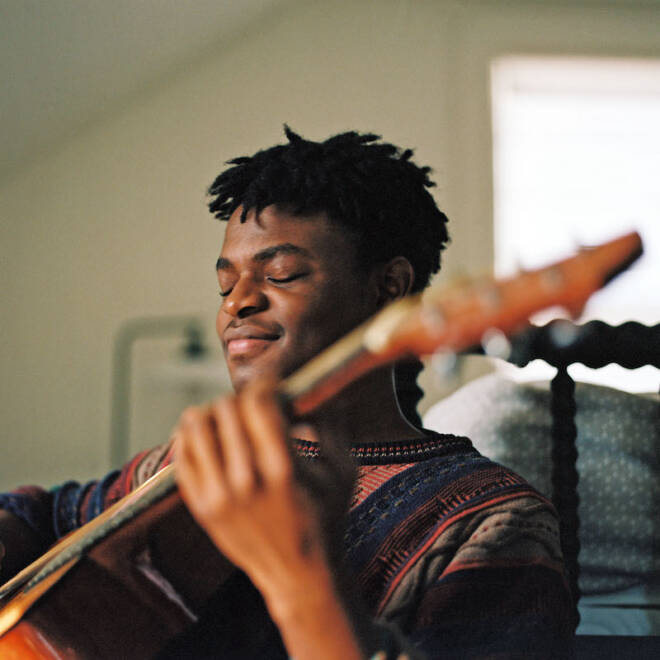 The beauty of the international and intersectional language that is music is hearing another person, someone you've never met, express feelings that feel so intimate to you; a reminder that as separate as our experiences may be, we often share the same hopes and anxieties. When an artist loves a song so much they choose to create their own version of it, it is like experiencing the same emotions from a different perspective. Miloe’s cover of “Solo” (originally by Congolese/Belgian artist Lous and The Yakuza), is a prime example of how music allows us to feel more connected to not only the world but ourselves. In the music video for the song, shot alongside his parents, Miloe has a conversation on diaspora and the cultural shift in immigrating to a new country. With references to The Democratic Republic of Congo’s 1960 independence from Belgium and the continuing trauma and racism, the song’s lyrics discuss the lasting impact of imperialism and colonization on Black individuals. The vocals are precise but still highly emotive as the song asks “Why is black not a color of the rainbow?” Photo by McKayla Chandler. 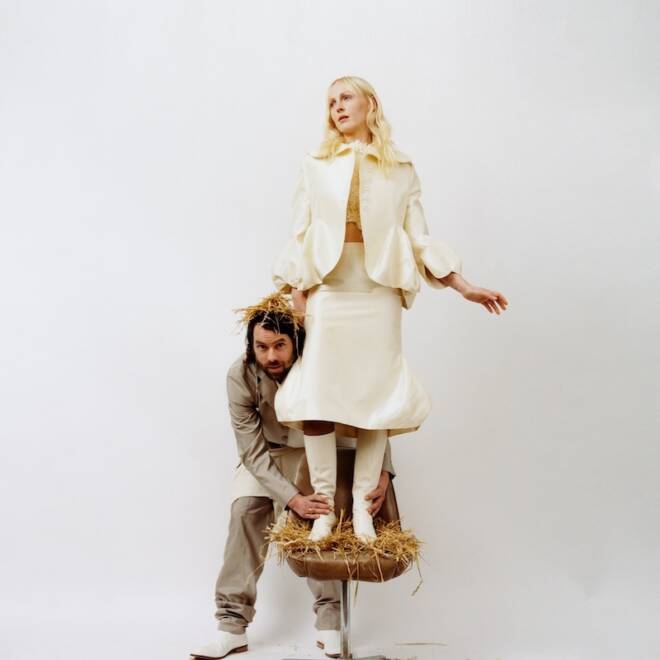 LUMP, the collaborative effort of UK musicians Laura Marling and Mike Lindsay, are back with their upcoming sophomore album Animal. While both artists are known for having a folk-inspired sound, LUMP is distinct from their individual work; the single “We Cannot Resist,” with its pulsing synths and drum machines, showcases LUMP’s unique sound. Marling’s voice has a special quality that comforts as it draws you into every word she sings. Hushed whispers usher in the cogent and compelling vocals, while the tension of the verses builds with gradual intensity to a chorus of staccato distorted guitar riffs. The driving track covers how intense every emotion feels when you’re young; when life feels both promising and ominous. The duo’s songwriting showcases their ability to create sharp, witty and dexterous lyrics, floating in an apocalyptic world of young love, freedom and discovery. “We Cannot Resist” will have you reminiscing of the time when you were “kids on the run.” Photo by Steph Wilson. 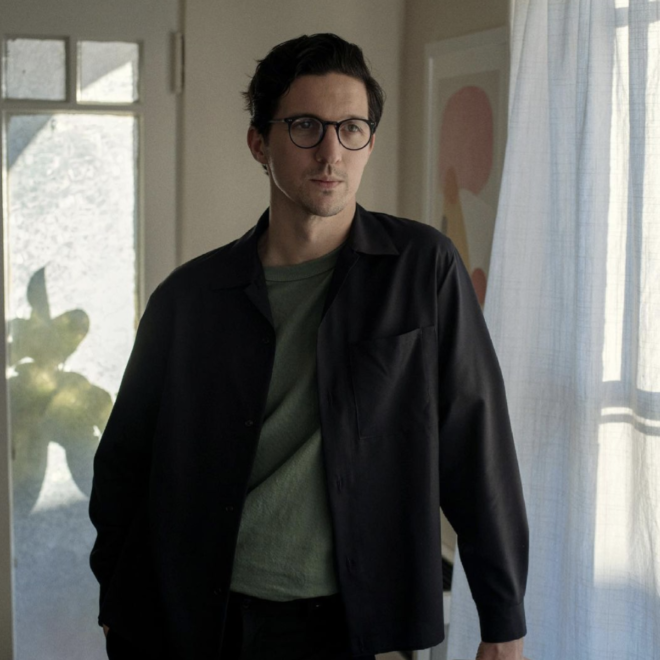 When Dan Croll moved to a new apartment at the end of 2019, he had no idea we’d all be burrowed inside for the next year. He found himself living with loud neighbors and small earthquakes that revealed the cracks of his new home and fueled his snowballing anxiety. In the energetic “Big One,” Croll maneuvers the landmines of nerves that surround his daily life at home, and grapples with the impending promise of the “Big One.” The track’s lyrics play off the fast tempo and staccato instrumentation carried by a picked, overdriven bass line. His partner is trying to calm him by reminding him they are prepared for situations that may arise, but Croll still considers themselves to be on a downward slope. Despite his worries, Croll still takes a humorous approach to the lyrics, declaring his objection that the neighbor he hates may fall on top of him if the “Big One” were to come. Photo by Max Knight. 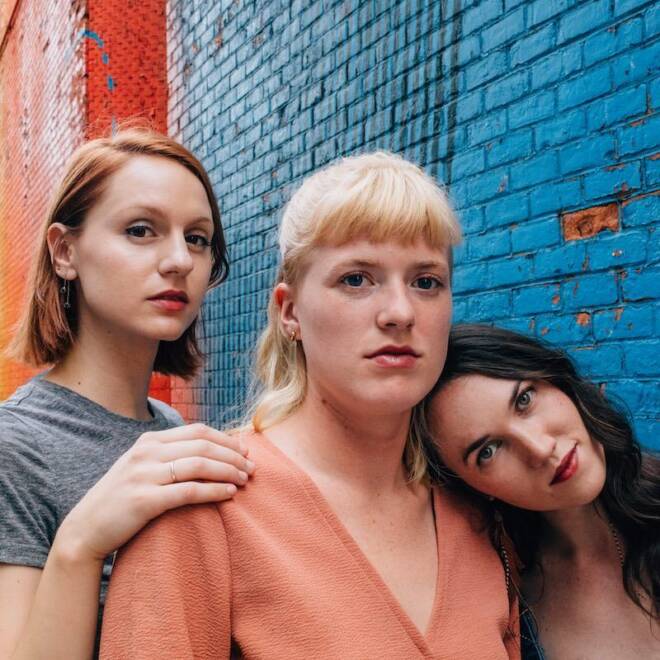 ALMA is an NYC-based trio of multi-talented women made up of Alba S. Torremocha (vocals, strings, bass, drums, guitar, ukelele), Lillie R. McDonough (vocals, piano, glockenspiel, violin, hammer dulcimer) and Melissa K. Carter (vocals, guitar). The group was brought together by their love of beautiful harmonies and sundry instrumentation to create genre-bending songs that are both intimate and cinematic. Their newest single “Mornight'' is a synth-pop track that showcases their unique sound as they introduce left-field instruments into the pop sphere. An ode to NYC, the song is as bustling and diverse as the city it was made in as the track swells into a cacophony of sound as strings, atmospheric sounds and the group's powerful harmonies soar together. The lyrics contain all the emotions and joie de vivre of a never-ending prodigious night that will be recounted for years to come. “Mornight” is an anthem for excitement and creativity in a city that is a haven for so many artists and makers. Photo by Abbey Mackay. 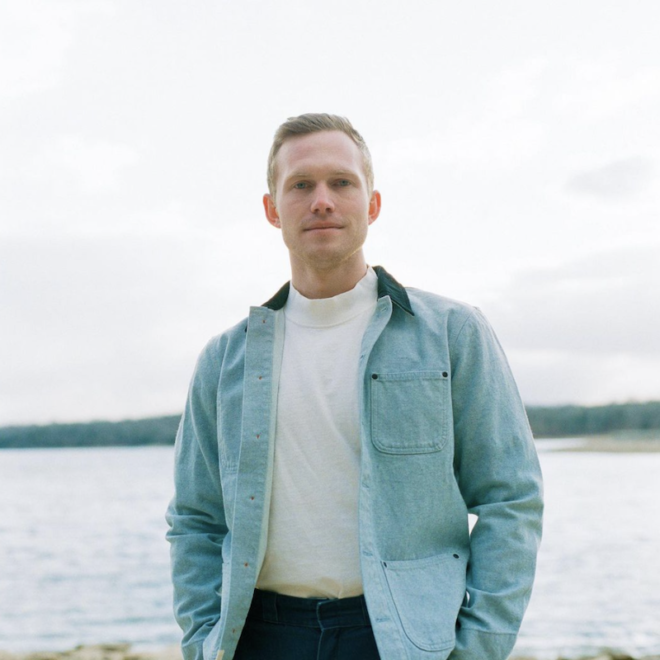 From the opening line of “Faults,” Ross Nicol proves to be a wordsmith. With clever wordplay, Nicol laments over a love you want but isn't what you need, “I know my faults down to a fault, but I still love you.” A piano and an acoustic guitar that perfectly blend together line the instrumentation of the song as a stack of Nicol’s vocals sweeps you away. The drums kick in with a punchy chorus that brings the song’s groove to full fruition while the lyrics grapple with the disorienting feeling of not fully understanding what’s happening but not wanting to lose. When Nicol sings, “You need someone else / Someone who would dive in / Lend you their life,” the image of Leonard Cohen’s “Famous Blue Raincoat” comes to mind as both men come to understand that the person they love needs something they aren’t able to give. Even with just one listen, “Faults” is a song that will leave its mark on you. Photo by Daniel Chaney.