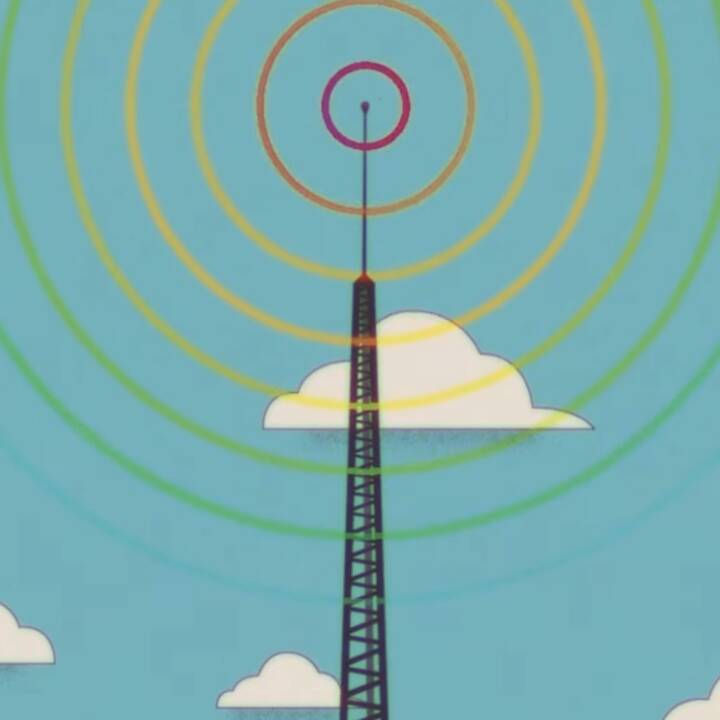 Our music video for St. Lucia’s synth-driven retro pop banger “Rocket On My Feet” opens with a striking animation of the band’s name, signaling the long-awaited return of husband-and-wife duo Jean-Philip Grobler and Patti Beranek and their optimistic and upbeat sound. The video, illustrated by graphic designer and animator Lauren Haug, centers around the colorful vibrant force of music. Coming from radio towers, boomboxes and animated versions of a young Grobler and Beranek themselves, these sonic waves reverberate throughout the video.

Honored to replicate and incorporate the single’s cover art, which was produced by artist Ryan Miller, Haug drew from retro-inspired color palettes, as well as taking inspiration from the 1973 sci-fi film Fantastic Planet and Hayao Miyazaki.

Telling a story from the perspective of these young figures was important to Haug in her approach to the animation for the video. As she points out, “Children are wonderful sources of inspiration when it comes to knowing how to let loose and have genuine fun,” and in the video, they serve as role models for staying true to ourselves and listening to our intuition. The colorful waves we see throughout the video are evidently not visible to or appreciated by the adult figures in the video, who Haug says represent “the idea of responsibilities and things that demand our attention in day to day life” and “the constant stream of news, notifications, feeds that are filtered and telling you how to think and what to do.” In the face of these forces of judgment and distraction, the young duo quickly decides to plan their escape, secretly crafting a UFO-esque vehicle as their getaway ride.

Ultimately, the two fly off into space, over the rainbow and into the stars, where there are no limits to the freedom of expression and pleasure that music brings them. Whether viewed as a symbol for all joyful things in life, or as a literal depiction of the joy music alone can bring to the world, the music video encourages the viewer not to sacrifice what it is that makes them happy, despite whatever judgment others may cast.

In the video, we see the radio tower that appears in Miller’s single art, emitting the visual signal that the duo used as “a runway to follow their intuition.” As Haug states, “We might not have been able to see it in the beginning, but the kids could see and hear it all along.” Using visuals to assist—and not overpower—the song in relating a message to listeners and viewers, Haug’s “goal was to work in tandem with St. Lucia’s ideas of following your intuition, remembering to have fun, and escape the frenzy that is everyday life.”

One of the most important things for Haug to convey visually was the song’s theme of friendship and connection, and this comes across throughout the video in the clear bond they share in their creativity and love of music. A poignant moment for this theme in the video, Haug says, is the transition from the outside of the children’s workshop at the base of the radio tower, to the inside, where we see them collaborating on their secret escape project, which causes the colorful waves of sound to return. Haug says, “This change signifies that even though life may throw things at you to bring you down, there will always be ways to return you to your happiness. It’s when you take matters into your own hands that will change your life.”

Rocket On My Feet