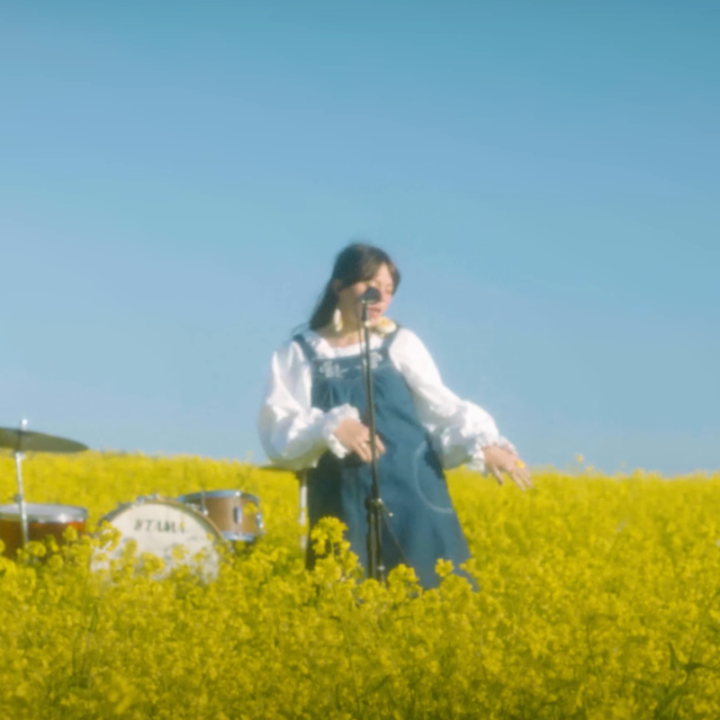 The music video for Mae Powell’s dreamy-psychedelic-folk groove “Yellow Flower,” directed by Alec Goldberg, opens with the artist laying in a field of—you guessed it—yellow flowers, which is simply too literal not to be taken as an artistic wink, one of a few you’ll find if you’re looking for them. Powell sings wistfully of the foggy gray of Twin Peaks, of poems and pomegranates, and sways as she meanders through the field, which seems to extend endlessly in every direction under the blue cloudless sky above. Eventually, Powell comes to a drum kit and mic stand amid the wildflowers, where she promptly takes the stage, singing into the microphone as her four bandmates pop up from the flowers around her; the drummer takes his place at the kit behind her, the others appearing with their instruments in-hand, poised to join in. It can be no coincidence that at this climactic moment she sings one of the song’s most hard-hitting lines: “Even though our country’s fucked and everything that’s published sucks / We’re looking to change that with love / Yeah, we’re gonna change that with love.” The video ends with some lively bird’s-eye footage of Powell and her band sitting around on a blanket in the field at golden hour, jamming with Powell on guitar and other band members on various smaller instruments—a xylophone, a pan flute, a shaker. At one point, Powell drinks nonchalantly out of a cowboy boot. While their message is profound, there’s no doubt they like to have fun with their delivery.