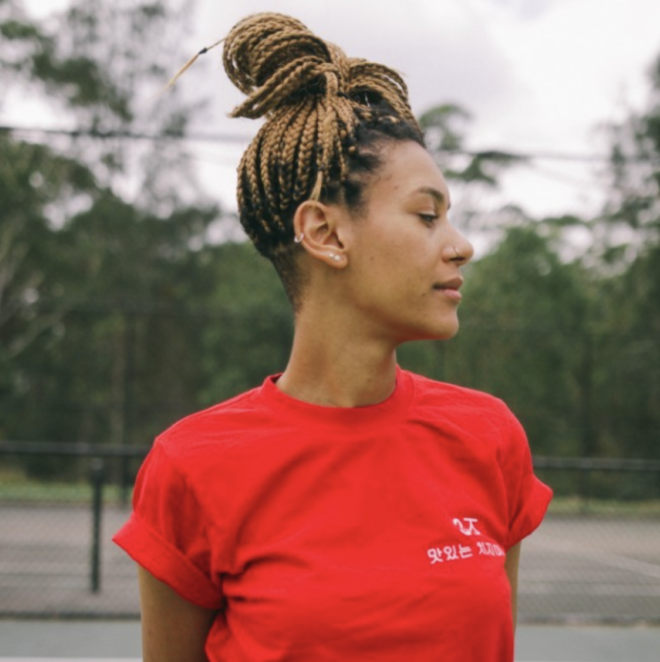 Berlin-based songwriter and soul singer Donna Arendse is The Septembers. On “Night Games,” her voice floats confidently atop the slowly expanding production of Melbourne-based producer Wayfarer//. The result is a deeply affecting electro-soul track that eventually grows to a sudden and surprising catharsis. At first, there is only a lonesome piano sample, and Arendse’s layered vocals lifting from the ground around it like swirling mist. When the bass finally kicks in, it seems to circle the piano like prey, and the poetry of the first lyrics shrouds the scene with even more mysterious tension. Halfway through the song, as Arendse sings the track’s mantra over and over in her honeyed alto, the words seem hesitant to leave their home in her heart. But the feeling is too powerful to stay in there. Soon it swells into a thunderous wave of sound, booming in and out of focus. And when the wave recedes, the five words written in the sand need no further explanation. “No one wants to hurt.” 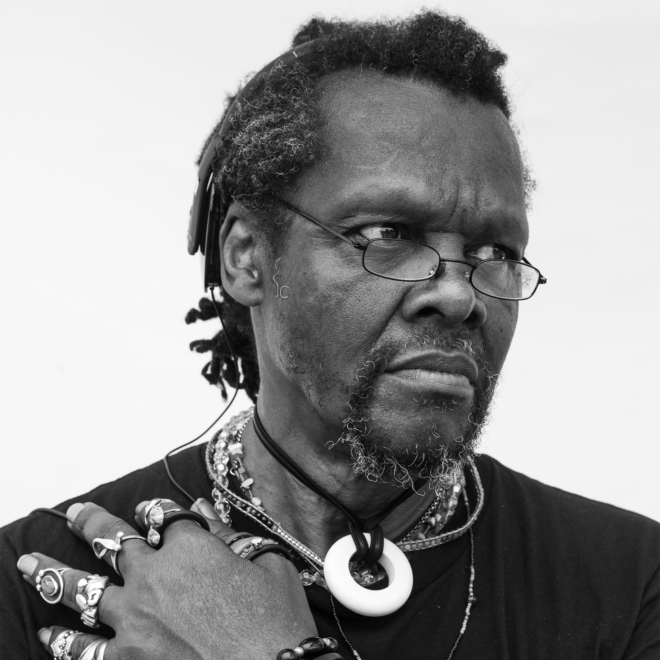 Lonnie Holley’s early life in Birmingham, Alabama was chaotic: working from the age of five, “home” was either a whiskey house, a state fairgrounds, or a rotating orbit of foster care. Now a musician and artist with work in major museums and on permanent display in the United Nations, his pieces are imbued with furious improvisational creativity born out of struggle.

Just listen to that spacey Mellotron: "Like Hell Broke Away," out now on Jagjaguwar from the EP National Freedom, suspends old school blues in a fiery galaxy far beyond here. Kind of like the surreal circumstances of our current national woe. The gravity of Holley’s voice though, with its grave-shaking gravel, holds us down from floating away.

I like to imagine him singing to a hot celestial blues club, stars on backup, with space suited expats swinging on his every word.

space scat and some rubble, 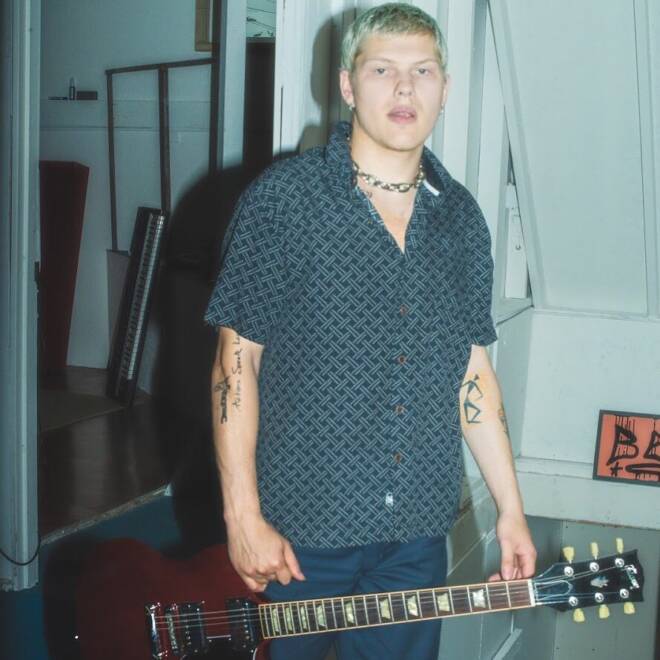 The Sleepovers - Come Back

Songwriter cham ii’s third single as The Sleepovers, “Come Back,” was created at home alone. Its location in the world of music is that uncontrollable molten center of true DIY bedroom pop: a person giving time to a feeling, alone, perhaps literally in his bedroom, and seeing what music comes out of it. In this case, the feeling being explored is FOMO: the fear of missing out. “Where are you guys going? Can I come along?” starts the track, and the question is never answered. But as time passes, it feels like cham is escaping deeper into his own mind, and that is an answer in itself. “Feel like a square, feel bad / that I can’t find my path,” he sings, and you start to realize the whole song is built on that feeling of meandering in the dark. But another word for “meandering” is “improvising,” and the sense of unedited spontaneity is one of the track’s strong suits. As soon as you compare The Sleepovers to another artist, the vibe shifts drastically and the comparison is gone. When the warm humming of synths is joined by the blooping funk of electronic water droplets in the track’s first moments, it might remind you of early chillwave artists like Toro y Moi. But then when cham delivers a stream-of-consciousness flow over an echoey breakbeat later on, it feels like hip-hop alchemists BROCKHAMPTON are more nearby on the musical family tree. Sometimes you just start walking and the path finds you, again and again. 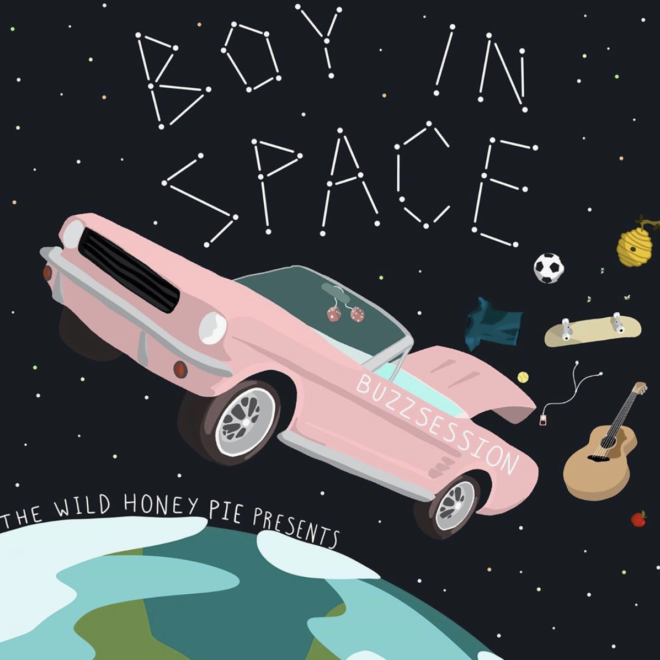 Boy in Space - Take on Me

Boy in Space, the moniker of Swedish singer-songwriter Robin Lundbäck, reimagines the 80s hit “Take on Me” by a-Ha. While the original holds all the best parts of the era including iconic synths, this live version brings a renewed focus to the lyrics. Letting the words breathe allows for their weightiness to hit in lines like, “Slowly learning that life is okay / Say after me / It's no better to be safe than sorry.” Sustained falsetto musings from Boy in Space hammer in the point that being uncertain is no way to live if you don't want life's best moments to pass you by. 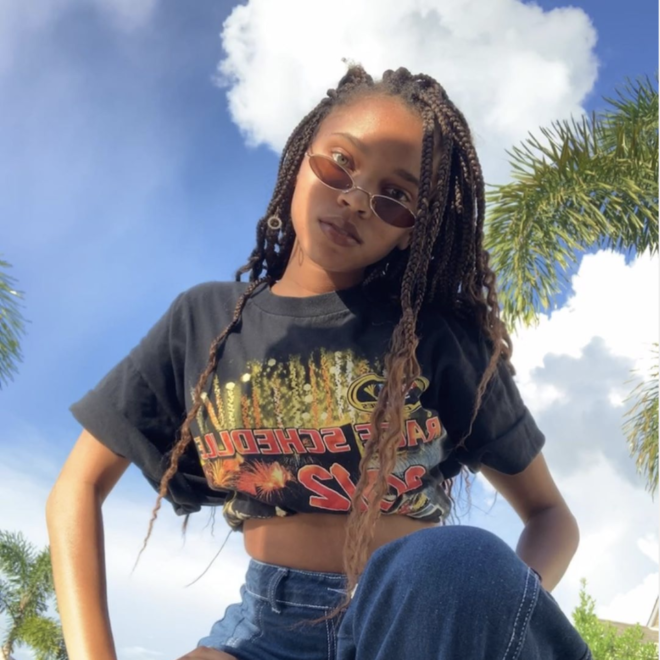 Melting colors bleed into each other as Amaria’s new track "Moon" wraps itself around us like a delicious fog. The tune opens with a simple, oh-so-groovy bassline and a wah-wah synth but quickly becomes so much more. Amaria’s voice floats over a side-stick snare and a nearly imperceptible down-pitched vocal—something in between a duet and a ghost. "Caught up in all the motion / my mind is like the ocean," she sings, delicately placing each note in its place. It’s R&B at its most intimate and bedroomy, bringing to mind the romance of late-night infatuations. "Take me to the moon," she sings, "up high, up high," and we lift our eyes skyward in response. 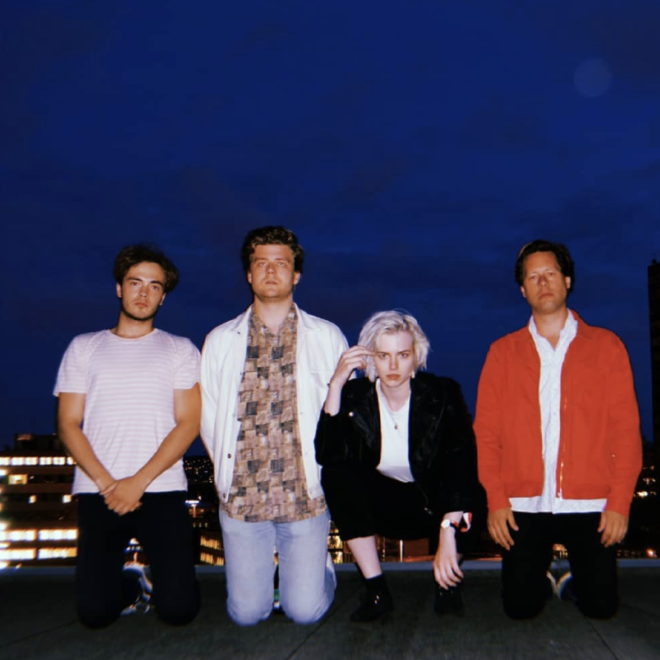 Norwegian band Das Body writes off-kilter pop music that simmers with quiet intensity, occasionally erupting and becoming unhinged. This catharsis, and the dark, catchy hooks that underpin it, is what makes “On Request” such an incredible listen. Singer Ellie Linden insists, “I can make the idea come true for you if I only know what you’re asking me.” It’s an offer to do whatever it takes to meet the demands of another, but it’s also searching for clarity; she can’t hit a target which she can’t see. Eventually, a sense of desperation builds, and roaring guitars surround the vocals. “On Request” explores the feeling of bending yourself to meet standards that are not your own and bristles with the frustration that comes from wanting to please someone without understanding how. The effect is soaring and raucous as Linden wails, “I’m gonna call up all my lovers. Tell them like it is.” She may not know how to meet the unspoken request, but the resulting tension becomes an explosive song. 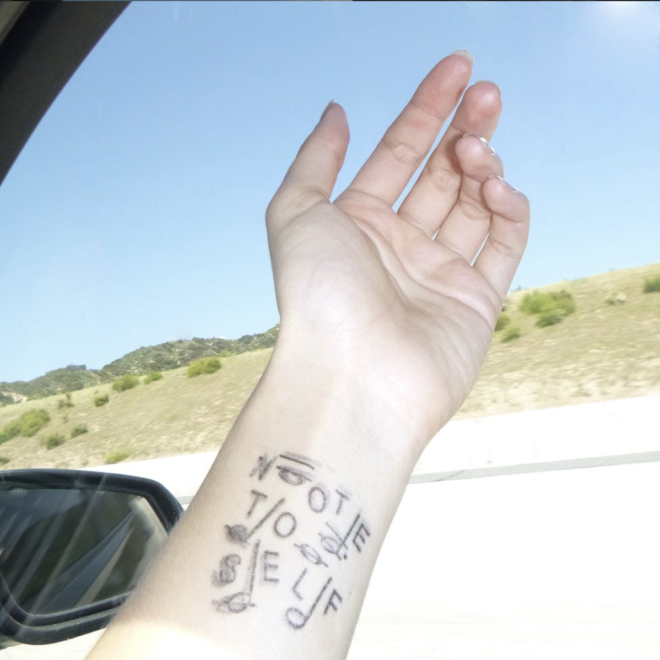 Jim-E Stack feat. Empress Of - Note to Self

Shuffling about in our own existence this year sometimes feels like we’re playing a losing game. The days mesh together—some good, some already forgotten to the count of our isolated months. As if answering our loneliness, producer Jim-E Stack returns with “Note to Self,” a track that is equal parts aware and uplifting. "Note to Self" features a soul-cleansing vocal from Empress Of (aka Lorely Rodriguez), who he collaborated with on her songs “U Give It Up” and “When I’m With Him." Akin to the two's previous collaborations, the song holds optimism in both the lyrics and the production. The vocals urge us to “just let it knock you down” and not to fight what’s coming to you. In the end, you’re going to come up stronger than you were before. Danceable drums and light percussion carry us through the body of the track—uplifting in the midst of our summers. 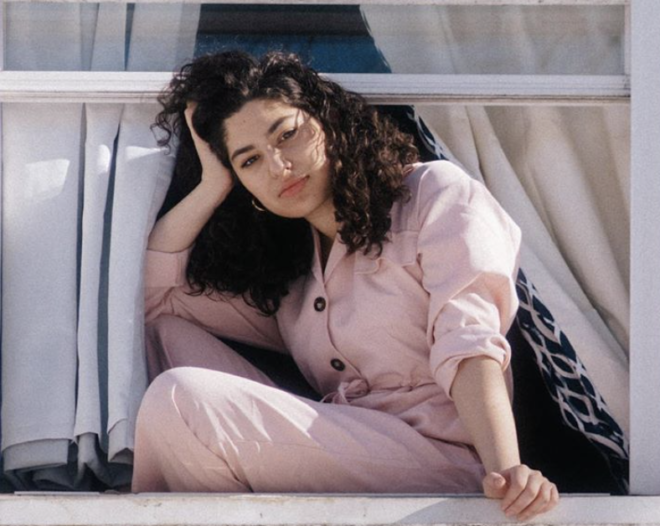 Throughout the gorgeous, lush “About April,” Alex Banin fascinatingly explores the intoxicating effects of a love affair gone wrong. Love can be a drug in its own right, and Banin examines the painful emotions that can come with its withdrawal. As she states “Yeah, maybe you’re still lingering / In nothing but the rushes of adrenaline,” the beat starts to kick in, pushing the song towards a rolling groove. The track follows the journey that she takes as she comes to terms with the fact that the person she’s singing about has changed during their relationship, and they’ve irreparably grown apart. We all have to learn eventually that we cannot change or control other people, no matter how badly we may want to. By the end of “About April,” Banin reaches the acceptance stage of the grieving process—“No matter what happens I’m gone / There’s nothing else to do,” she sings yearningly—vocalizing the end of her relationship, and beginning to heal. Listen to “About April” wherever you stream. 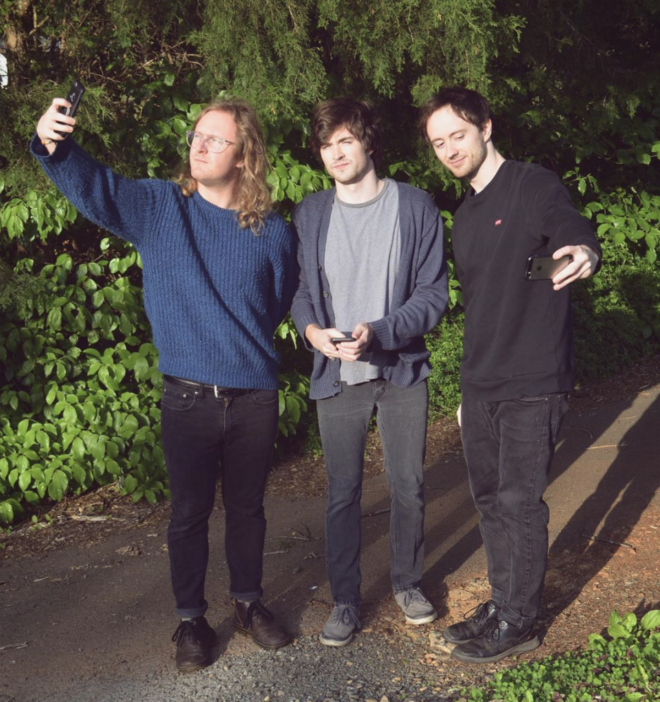 Stray Fossa - For What Was

"For What Was," the new release from Stray Fossa glistens and glitters its way into a dreamy-dancey soundscape. This newest tune is in keeping with past releases by the Charlottesville, VA based trio—somehow maintaining a driving energy while creating what feels like infinite space. The song opens with a guitar progression and drum groove produced to sound narrow, but the vastness comes in immediately with the soft vocals in the first verse. "Lean into stranger thoughts," sings Will, "Stronger than I could dare ignore," right before taking us into stranger realms of ethereal sound design and vocal harmonies. From then on it spirals outward into the ether; this song is the soundtrack to a road trip in outer space. 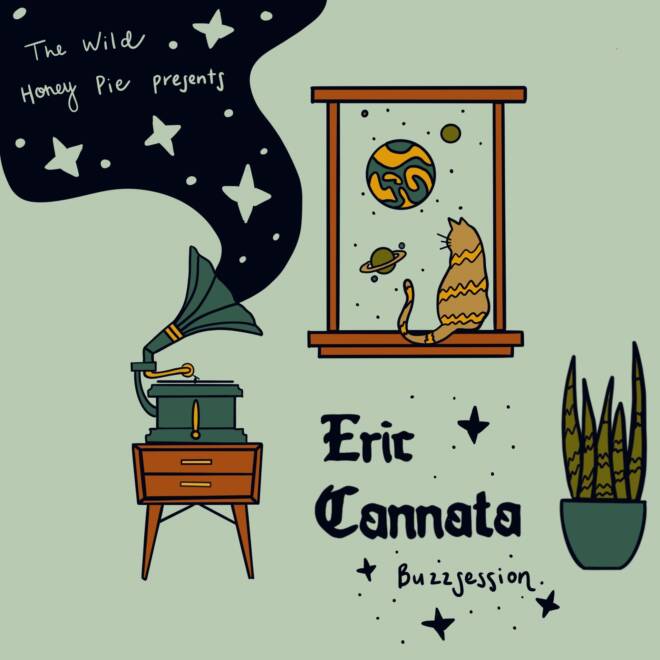 Eric Cannata is known as the guitarist for Young the Giant, but earlier this year, he released an EP titled Lonely Beast. It's a personable, sweet, fascinating record—establishing him as a folk artist with his own distinct sound. Cannata recorded an acoustic version of the EP's title track in his home studio in California. His vocals are so clean, expressing the elemental and sincere themes in his lyrics. "Lonely Beast," he explains, is about a house cat.

Hearing this nuanced recording of the track illuminated a beauty in our quarantine loneliness I hadn't considered yet. It's difficult to be as graceful at being alone as the lonely beast seems to be. It's difficult to venture towards contentment and relish periods of rest. Maybe the cat is a "lonely beast," but it knows when to savor the warm light coming in through the window and the slow hours of a midday nap. 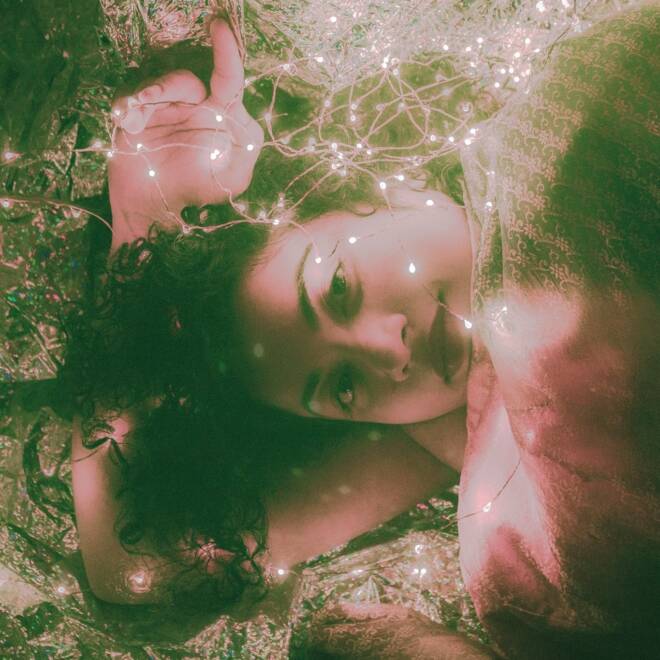 Thanya Iyer - Please Don't Hold Me Hostage for Who I Am, Who I Was

Refreshing and whimsical, “Please Don’t Hold Me Hostage for Who I Am, Who I Was” opens a festival of worldly sounds, complete with folksy flutes and acoustic percussion. Thanya Iyer’s voice sounds at once youthful and wise as she cheerfully delivers a straightforward message: You control your own life, you can choose to heal. She repeats the message, this time making it personal: “I take it in my own time / I make the choice to get better / Please don’t hold me hostage for who I am, for who I was.” She goes on to say “I could be a dancer,” a suggestion that it’s never too late to pursue a dream, regardless of the past. The bridge section introduces a musical departure, in which Iyer repeatedly declares, “I know in life there are highs and lows,” the bassline closely following her vocal melody, a stark contrast to the airy counterpoint of the verses. A breakdown follows, the music growing darker as the meter slows. Edgy synth and almost robotic rhythmic vocalizations grow in intensity until the tension releases and light breaks through, ushering a return to the original groove. Iyer repeats her original message: a reminder that we all have the power to guide ourselves out of darkness.